⯈ Determine Which You Have?

YOU ASKED FOR IT, WE ARE DELIVERING

With a long heritage of over 63 years and 600,000 plus machines in circulation, our Customers have asked for more access to Shopsmith Engineer Support to:

While we wish we could bottle Shopsmith Experts, and have unlimited resources, they just aren't available. So, we have created a special Shopsmith Engineering Support Line especially dedicated for Equipment No Longer Under Warranty. (Our equipment is such high quality; it lasts and lasts!)

We Look Forward to Speaking with You! 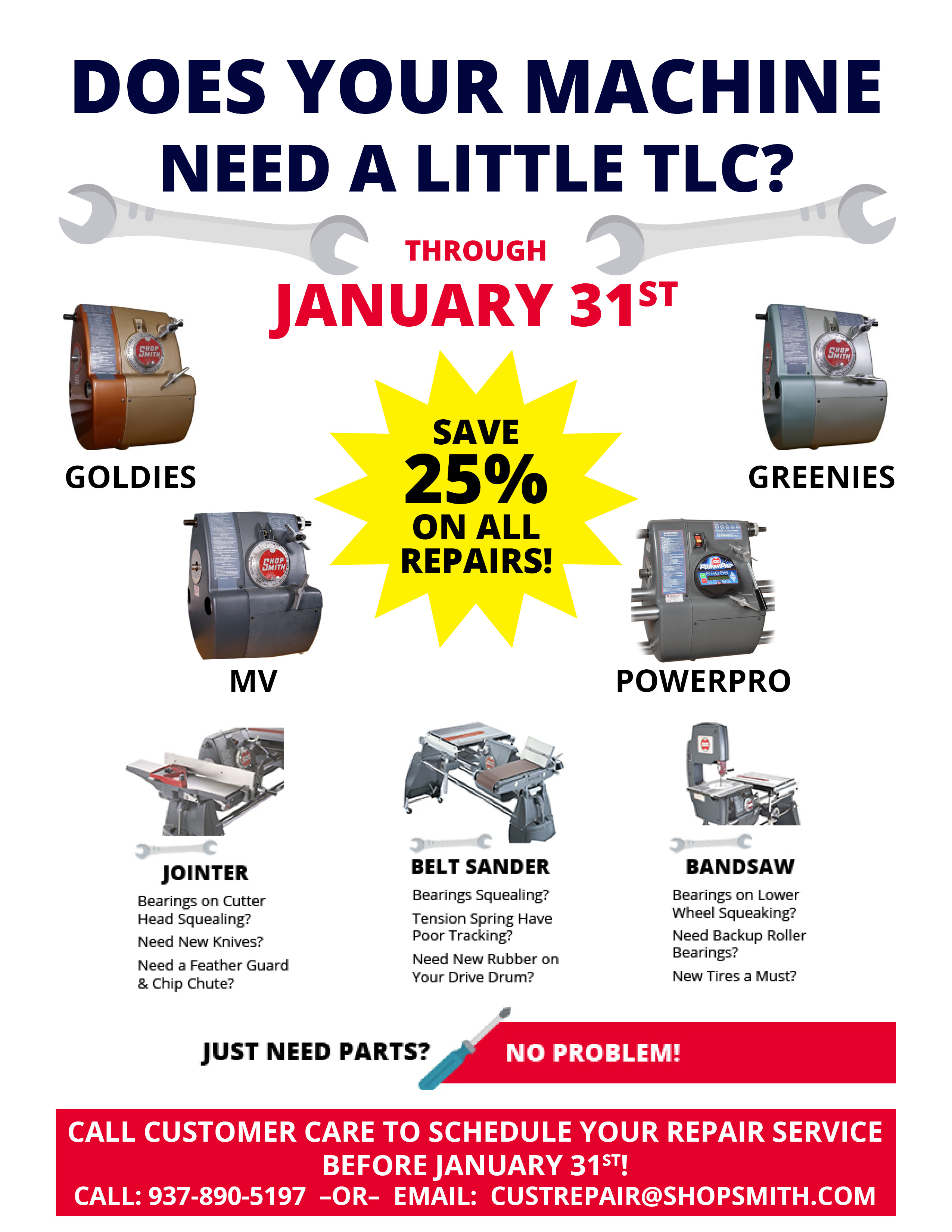 What Shopsmith Owners Have To Say 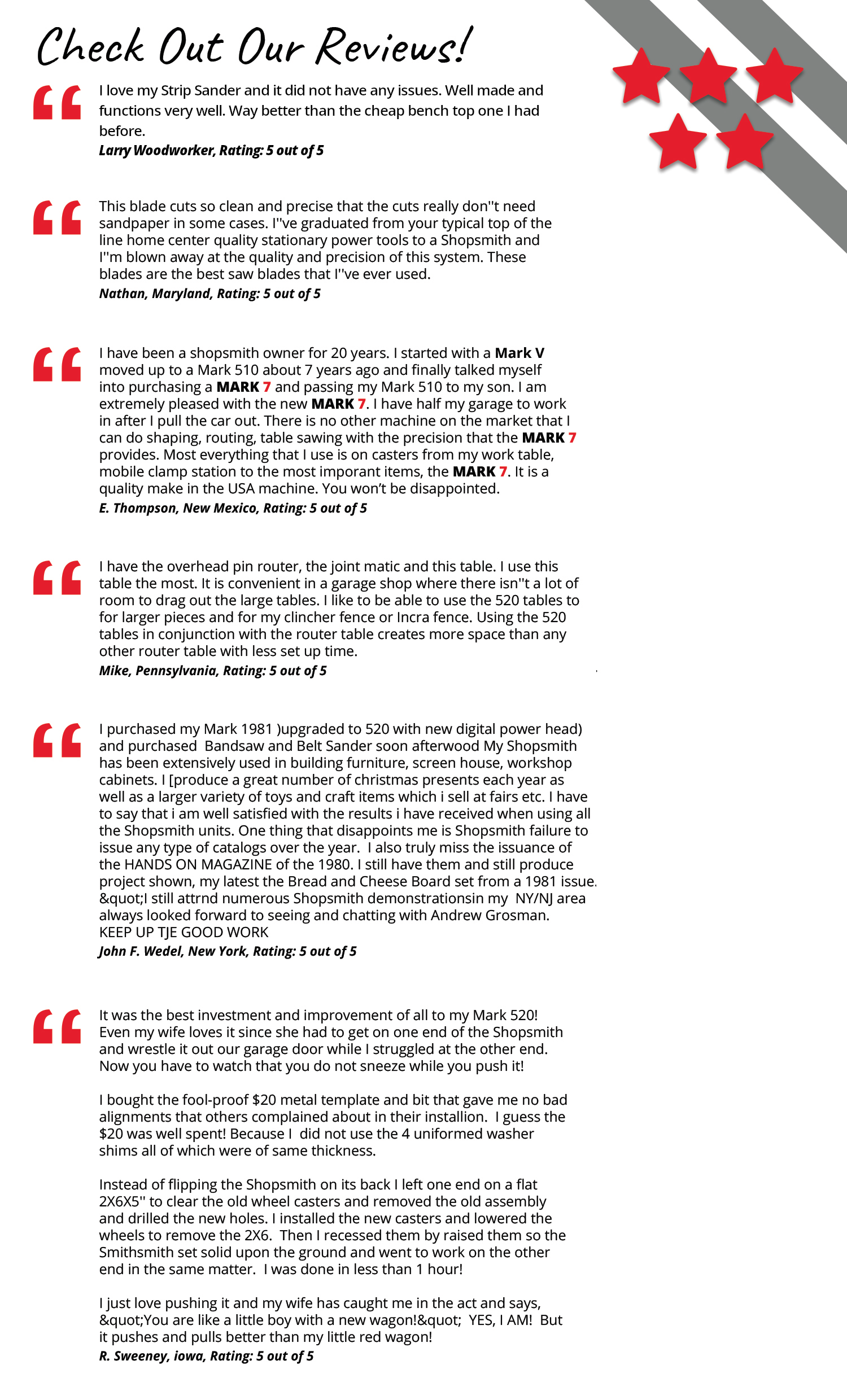 Read What Even More Satisfied Shopsmith Owners Have To Say

"I never regret what I paid for mine"

I have owned my Mark V for 24 years. In that time, I have bought other stationary tools (two table saws, another bandsaw and a jointer. But through it all I have kept and used my Mark V and will never give it up. It has survived four shop moves, two stints in storage and heavy-duty use. I have broken it down and transported it in the back of a station wagon, set it up outside a Brooklyn apartment to saw plywood and, currently, it is the first big tool in my new shop as I build the shelving and cabinets for the new space. Without my Mark V, I would probably not have tried turning, something I really enjoy. Using the extension tables, It can handle sawing 4x8 sheets of plywood. It is an exceptional tool, a lifetime purchase in a world of disposable products. But it is more than a tool, it is a relationship as Shopsmith is a great company, not some "nameplate" sold from one conglomerate to another. Customer support and service is exceptional. Is the Shopsmith expensive? In terms of initial purchase prices, yes. In terms of long-term value and function? No, it's a bargain. I never regret what I paid for mine.
Bunkie - New York City

Limited Space A Problem? Shopsmith Has the Answer!

If I didn't have my Shopsmith, I wouldn't be able to do any woodworking in my limited space. It's the only solution for me... and I wouldn't give it up for any amount of money.
Jim T. - Venice, FL

I've owned a Mark V since 1978 and have used it to build hundreds of (small and large) projects in a tiny basement shop. Anyone who says you need a barn-sized shop to build top-quality projects, obviously doesn't know a Mark V owner!
Don P. - Dayton, OH

Think Tool Changeovers Will Be Time-Consuming? Not So!

I've heard the objection (about tool changeovers) many times from people who do not own a Shopsmith... but I've NEVER heard it from a Shopsmith Owner.
Fred W. - N Scituate, MA

Shopsmith Is the Ideal Choice For the Inexperienced Woodworker!

The Shopsmith is absolutely amazing! I find it extremely easy to operate because it is so logical and precise. And the manuals and course book are so well organized, I just can't go wrong.
Sister Mary dePaul S. - Indianapolis, IN

Since receiving my Shopsmith Mark V, my woodworking capabilities have expanded into areas I never thought possible. I don't know how I managed for so long without your fine equipment.
Dick D. - Houston, TX

I have owned my Shopsmith since 1956 and have enjoyed it very much. The machine is really simple, once a person understands it. M.W. S. - Sumter, SC

The Mark 7's PowerPro Headstock Is Nothing Short Of Amazing!

NOTE: The two comments below are from customers who have upgraded their older Shopsmith Mark 5's with the new PowerPro Headstock that is standard equipment on every current model Shopsmith Mark 7.

My new PowerPro Headstock is a blast! I haven't had this much fun working with my Shopsmith since I bought it in 1987. Yesterday, I caught myself staring at it like a kid... with a big grin on my face... as I ran it in reverse, sped it up and slowed it down. Then, when I used my Shopsmith Bandsaw to resaw some thin sheets from a 6" oak board, I was REALLY impressed with the increased muscle that it had!
Scott M. - High Point, NC

The enhanced high-end speed of my upgraded PowerPro Headstock produces super-smooth saw and router cuts... while its 250 RPM lower limit lets me rough-in large turnings on my lathe and use huge Forstner Bits without fear of burning them up. Congratulations, Shopsmith. The PowerPro is awesome!
Dick L. - Cordova, TN

The Shopsmith Mark 7 Is Accurate!

I've been very pleased with the precision that can be achieved with the Shopsmith... and wouldn't trade the variable speed feature for a whole shop full of individual tools. Each time I try a new operation, I'm amazed at the engineering and quality that went into this tool!
Gary R. - South Harpswell, ME

The Shopsmith Is Versatile!

I have owned my Shopsmith for many years and have used it to make a number of pieces of furniture. It is a most useful piece of machinery. It is true that with the Shopsmith, you need nothing more to do almost any kind of woodwork.
Harry P. - Lawrenceville, NJ

Shopsmith Machines Pay For Themselves

I feel that over the years, my Shopsmith has saved me enough money that it has paid for itself several times over!
V.E.M. - Milwaukee, WI

My Shopsmith has clearly paid for itself several times over by helping me furnish and maintain an old ten-room house... not to mention the fun I've had turning out walnut bowls, plates and candlesticks as gifts for friends and family.
Willis G. - Defiance, OH

When Shopsmith makes a piece of machinery, they make it to last a lifetime!
Gerald F. - Asheville, NC

I have a Shopsmith that I bought over 20 years ago and value it very highly. My two sons used it often and now my grandsons are using it and find it very useful for school wood shop projects.
Alva G. - Tacoma, WA

Shopsmith Is A Service-Minded Company That Stands Behind Its Warranties

I want you to know what a pleasure it is to do business with a courteous, efficient business such as Shopsmith.
Daniel B. - Knoxville, TN

I am a satisfied Shopsmith customer who is proud to recommend your product and state that you stand behind your warranties.
Ellis G. - Phoenix, AZ

Join the Shopsmith Family Like Robert T. of Orlando Florida!

It's obvious to me that the owners of Shopsmith and the company are a rather unique group, in that they are very close in their feelings towards this machine. It appears that anyone who has a Shopsmith is extremely fond of the machine and loyal to the company. Maybe that's what makes it so great! I know that I for one, would NEVER part with mine! I saw my first Shopsmith in 1956 and it took me until 1966 to get my own... but, during that ten-year period, I never changed my mind or desire to have one of my own.
Robert T. - Orlando, FL

There's Nothing In the World Quite Like A Shopsmith!

The extension table brackets are a must have if you want to take your Shopsmith to the next level. With 3 sets you can create a near 4 ft in feed table and a near 8 ft out feed table which makes it extremely easy to cut 8 foot sections of custom moldings. These brackets turn the Shopsmith into the most feature packed stationary router and shaper system that I've ever seen. And when it comes to the table saw the options are limitless. They can also be used to widen the drill press table as far your imagination and budget can take you. With enough legs, tubes, and brackets everything is possible including one person cuts of 5'X10' plywood sheets without the worry of loosing control. I've even used this table system combined with a very simple jig to cut large circular table tops using the overhead router configuration. There's nothing else out there in the world that does this. When you stand in front of this machine the only thing that limits you is your imagination.
Nathan - Maryland